The Brazilian Journal of Public Administration (RAP), was launched in 1967 and has been published continuously since then by the Brazilian School of Public and Business Administration of the Fundação Getulio Vargas (FGV EBAPE). The journal is published in three languages (English, Portuguese and Spanish) and it is the leading journal of public administration and public policies studies in Brazil. In recent years, RAP has attracted international academic contributions, especially from Ibero-American countries.

RAP's mission is to publish high quality contributions in the field of public administration and public policies, exploring their intersections with organizational theories, political science, economics, urban studies and international relations. RAP's empirical locus is mainly Brazilian and Ibero-American context, but contributions from other countries are welcome. RAP counts on a broad academic and practitioner readership, and privileges contributions that bridge theory and practice.

RAP is on its path toward internationalization, and counts on an outstanding Brazilian and international editorial board, well-known for the relevance of the academic contribution in the field of public administration.

The periodicity of the journal is every two months, it’s published in Jan-Feb; Mar-Apr; May-June; July-Aug; Sept-Oct; Nov-Dec.

Former Title: Bulletin of the Research Center of Administrative EBAP.

The publication receives funding from the following institutions: 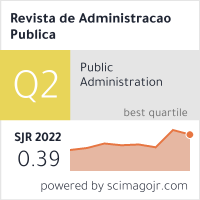